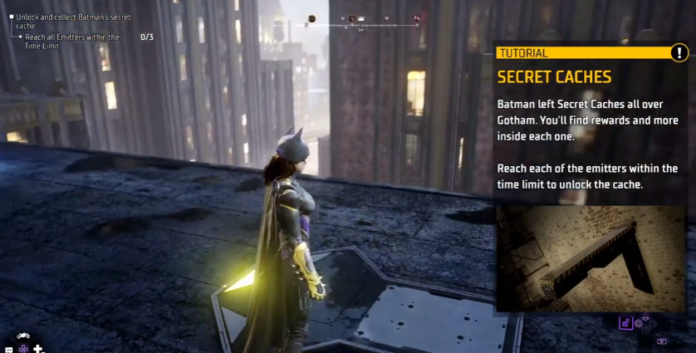 In Gotham Knights, secret caches are chests that contain a variety of upgrades. These chests are considered a side activity and do not unlock until later in the game. Gotham Knights includes a plethora of gear sets and things that each hero can equip or make. This guide will let you about all the 12 revealed locations of Gotham Knights Secret Cache along with some valuable tips.

Here are a few things you’ll need to consider before going on the Secret Cache hunt in Gotham Knights.

The location of the first area is between Financial District and The cauldron. Go up to the scanner on the ground and interact with it to start the location of the secret cache. This cache can only be found after Case 01: Batman’s Last Case is completed.

Go north from the previous location still in the Financial District. You can only get it after the first cache is spotted and scanned along with a trip to Belfry.

This one is south of the other two locations. Just go south of The Cauldron and look at the top of the building facing the Cobblepot Steel Tower.

In the Southside area of the city, look over the tower facing the south direction on the Lynton Avenue.

This cache is present in the Old Gotham. Look by the building just by Neville Street.

Go to Tricorner Island for this cache location. It’s on top of the building present on the right side of Quarterdeck Road. The last five caches need to be collected to have access to this one.

The seventh Cache can be found in the area of West End. The path for this one has a lot of towers so be ready for that.

For the eighth cache, Otisburg is the location you’ll need to look into.

Look on top of the Monarch Theatre in the Bowery area.

The next cache is present in Bristol. Search on the buildings around Oxylus Street.

This one is also in Bristol but north of the previous one. Look around the east side of Gotham City Reservoir for the cache location.

Look in Gotham Heights for this last cache. You have to at least get any 9 caches and a trip to Belfry before searching for this one.

With that, it’s the end for the Gotham Knights Secret Cache locations guide. For more help in your games, check out the Guides section on our site Retrology.

How to find the Cobblepot’s Office Bugs in Gotham Knights –...