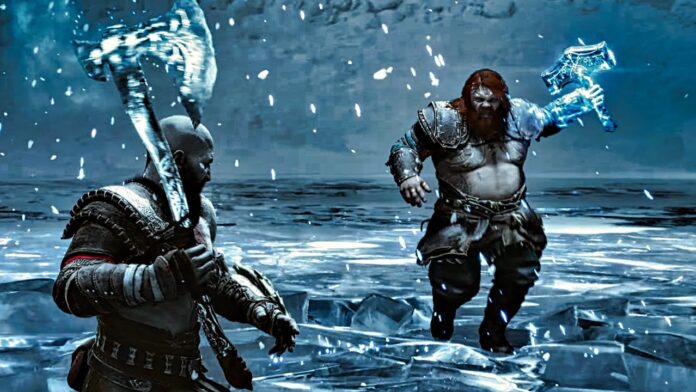 With the  God of War Ragnarok Trailer finally released, we can now surely talk about what the game has to offer. There were many points here which are well-knit with the last game. Also, the story is saturated with Norse Mythology which makes the stories seem more realistic and true to their origin. Let’s just get into the trailer breakdown now.

The tense connection between Kratos and Atreus was a major plot aspect in God of War. Atreus assumed his father didn’t love him or his mother because of Kratos’ continual absence, not that his father was away learning to manage his fury. The evolution of their relationship, as well as Atreus’ character development as secrets were disclosed, was an important component of the game’s plot.

In God of War Ragnarok, father and son are clearly at war once more, disagreeing at practically every stage. The pair will most likely have to learn to work through their differences or face great danger.

Atreus and the Tree

Atreus touches a tree which seems to react to his touch at the beginning of the trailer. It emits a pulsing light. This could be the result of anything related to Atreus which, hopefully, we’ll be able to explore. What the tree has to do with Atreus and his abilities is unknown.

Shooting down the Sun

There is a shot near the end of the trailer which showcases Atreus shooting at the sun. It’s well-known that Atreus is exceptionally skilled with his bow and arrow, to an excellent magical extent and this is further solidified when he shoots down the sun. He captures an eclipse of the sun and moon, transforming the landscape around him into a nightscape.

God of War franchise shows its true roots in mythology and never fails to add them in an interesting way. One of the myths includes the two ravens, Huginn and Muninn, who serve as Odin’s eyes. They survey the places where Odin isn’t and that’s how he keeps control over everything.

In the trailer, we see them briefly. Kratos and Atreus can be seen going towards a bridge and that’s when you can catch their glimpse right above Kratos’ head.

In the trailer, we can see new creatures. Some of them are like giant crocodiles while some are flying monsters. Along with that, it’s evident from the trailer that several of these old monsters will remain part of the story.

After Kratos and Atreus murdered Freya’s son, she vowed vengeance. Freya appears distressed and anxious in this scene, much like she did after the fight between Kratos and Baldur in the previous game, which culminated in Baldur’s death. Most people predicted her vengeance in the upcoming God of War game based on events in the previous game.

The trailer also shows a cameo of a giant wolf. While the big wolf in the God of War Ragnarok trailer is never formally recognized, it appears to be Fenrir. Fenrir is the son of Loki and the giantess Angrboa in Norse mythology. In God of War mythology, Loki is Kratos’ son, Atreus. That begs the question of how Atreus could have given birth to the colossal wolf Fenrir.

Putting it all together, it appears that the God of War team is either not concerned with strictly adhering to that part of Norse mythology or they have other connections in mind.

At the very end, we see a singular clash between Kratos and Thos which ends in a blue bright lightning. That was the last shot so that is all we see of Thor in this trailer.

Here is the God of War Ragnarok Trailer so if you want to look at it yourself, check this out.

The release date has now been officially established on November 9th, 2022, as revealed in the most recent trailer, which was released a few days ago. It’s expected to release on the 9th but the lack of date in the trailer makes it doubtful. the game is already delayed by a year so let’s hope it’s not delayed more.

With the God of War Ragnarok Trailer breakdown done, you may have an easier time understanding it. Until this game is released, check out similar games. Do visit the site Retrology and News section for more latest updates.