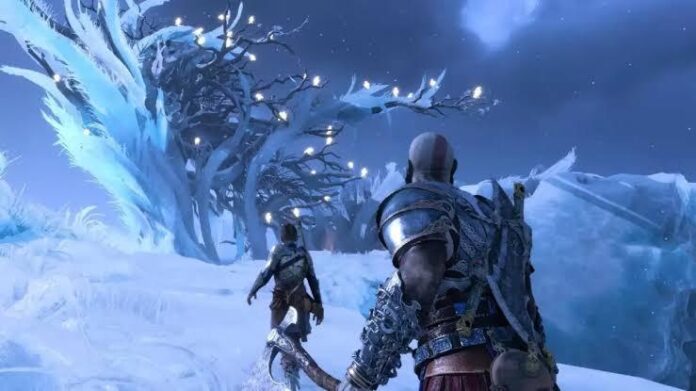 The Raven Tree in God of War Ragnarok has seven collectibles waiting for you to find. These include six chests and eyes of the odin favour. You will have to roam about the Niflheim area to collect all of these.

However, you have to first access the mystic gateway which you can only do if you have completed the storyline so make sure you have that checked. Then head to Neilfheim and start your hunt through the picturesque glaciers.

All of these six chests contain some items which you can use later in the game, it can be a weapon, an armour or an attack you can hit your enemies with. You will have to kill all of Odin’s ravens to open the chests though.

You will easily stumble upon this first chest as you put it to your left and go straight. This will open only if you have found 6 ravens. It will unlock the Chest Armour- a girdle of Raven Tears for you. This provides you with Increased healing from Healthstones, Rage, and Gear.

To find the second chest, move a little further ahead. This chest is also located on your left. However, you will be needing 12 ravens to unlock it. This will get you the Wrist Armour- Bracers of Raven Tears. It also increases your healing.

As you move towards your right, you will see two chests shining. Open the one you approach first, this is the third chest and it will unlock a Waist Armour-Cuirass of Raven Tears for you. You will need 18 ravens for this. It grants you a healing mist.

You will need 28 ravens to unlock the next chest you approach. It will grant you a Heavy Runic Attack- Breath of Thamur. It covers a vast area and deals a lot of damage to the enemies.

When you move a little further ahead, you will spot another chest. This one unlocks at 38 ravens and also contains a Heavy Runic Attack- Meteoric Slam. This helps slam the ground and rain fire ahead of Kratos.

The last chest unlocks at 48 ravens and contains a Heavy Runic Attack- The Finger of Ruin. This will summon a massive tornado that can lift enemies into the air.

Favour, The Eyes of Odin

After you have successfully unlocked all six chests, a boss “The Raven Keeper” will appear in front of you. Follow it down the hill and enter the arena on the right. Use the attacks and armour you have collected and defeat him. After which he will drop the Relic “Hilt of Forsbrandr” for the trophy “Collector”.

This was all about God of the War Ragnarok Raven tree collectibles. For similar guides, keep following Retrology.