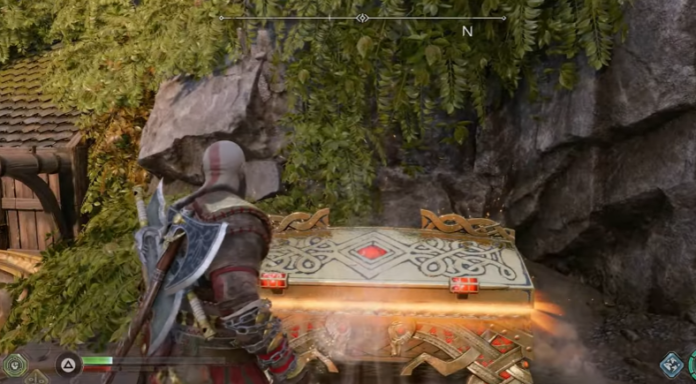 Similar to any other game, God of War Ragnarök also has some collectibles hidden throughout the gameplay. Some are easy to spot, while others need a little work to do. Today we will cover the Nidavellir region, which is part of the Svartalfheim area. There are 9 Collectibles in Nidavellir and this guide will show you where to discover them all in God of War Ragnarök.

When you get into town, there is a green barrier on the left docks. Shoot a green arrow at it to blast it up, revealing the relic behind it. If this is your first tale visit, you must first speak with the blacksmith, who is located just up the way and from whom you obtain the green arrows.

After getting the artifact, go up to the smithing shop and look around it on the ground. You’ll be able to spot it on the right side of the area.

Look up from where you got the Lore Scroll and you’ll see a Raven sitting on top of a hut to the left of the smithing shop. You can also spot it after getting the artifact. Just look in the opposite direction of the artifact and you’ll find the raven there.

Drop from the legendary chest and proceed downward until you reach a broken bridge on the left. More gas/wind is flowing out of a wooden chimney above the shattered bridge. Throw your spear into it again (this time from straight across), and you’ll be able to jump over the broken bridge. The flower is on the other side. If this is your first flower, it will begin the Favor “Nine Realms in Bloom” for discovering all nine flowers.

Continue northwest from the last position, beyond the watermill, to find some gas/wind coming from a wooden pillar. To construct a trail to climb up, toss the lance at the spot in the pillar. Climbing up reveals a Legendary Chest atop.

Turn right, and you’ll see a sparkling thing on the ground just by the chest. Interact with it to get the collectible.

You must first make your way to the village’s end side or mountainside in Nidavellir for this one. There should be a small ledge where you can climb to get to the opposite side. Continue to make your way through the tunnel until you reach the end. Turn left to reach another tunnel entrance. Follow its tiny one-way trail and you should shortly find the relic. The second artifact is lying on the ground in the center of the path.

This “collectible” is only for completing Durlin’s Favor “Spirit of Rebellion.” It becomes available following the completion of Main Mission 10: Forging Destiny. Durlin will give it to you at the end of the mission, so check to see if you accepted it already.

If you didn’t accept it during Mission 10, you can still accept it in the tavern after the story. Go up the path opposite the broken bridge with a cart full of pumpkins and enter the home at the end; Durlin will still be there after the story and offer the task. To climb up, take a boat to Dragon Beach, directly north of Nidavellir, and then throw a spear at the wall.

The wall then connects to a bridge at the top of the region, where you can use the chisel on a blue shrine to the left. This will cause yellow glyphs to appear in front of the large statue at the end of the bridge; interact with the glyphs to expose a crimson chest; open it to obtain Durlin’s hammer. Then give it back to Durlin. This will conclude the mission and you’ll get the reward.

To interact with “Berserker Gravestone,” you must first obtain the tale item “Inert Hilt of Skofnung,” which is obtained automatically in Mission 9: The Word of Fate. You may proceed if you have it.

This is discovered during the Forging Destiny quest. Drop to the open area after going down the mountain on the train, and the Berserker Gravestone will be just in front of you.

This is all for the collectibles found in Nidavellir in God of War Ragnarök. We’ve also covered puzzles from the game, so do check them out if you’re stuck.