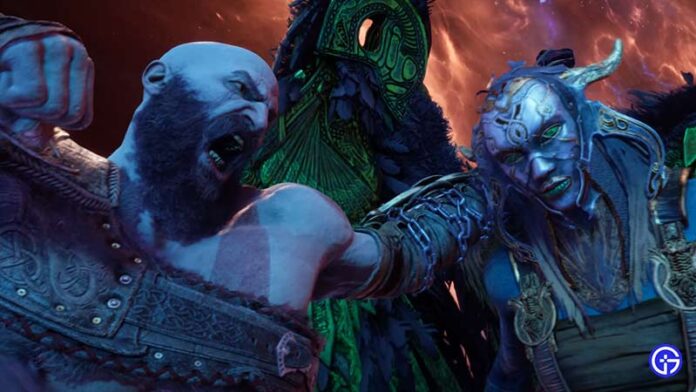 In God of war Ragnarok, there are a variety of weapons, equipment, and upgrades that will enable you to make Kratos unbeatable. One such piece of gear is the Broken Amulet, which grants Kratos many benefits and allows the player to employ enchantments. The enchantments are not, however, that simple to acquire.
The Amulet has up to 9 slots that can each hold an enchantment. The drawback is that not all of them are accessible simultaneously. You must locate the Jewels to repair it. Once fixed you can unlock the slots. They are dispersed throughout the nine realms, some of which can be obtained by completing the main tasks. The locations of the Jewels of Yggdrasil in God of War Ragnarok are listed below.

When you first acquire the broken Amulet in The Reckoning, two of them are automatically unlocked (Main mission 6). So without further ado, let’s locate the last 7 Jewels of Yggdrasil and enchant Kratos as much as we can.

Warning: There are spoilers in the following guide. Therefore, this is a good time to stop reading further if you don’t want these spoilers.

Amulet of Yggdrasil’s additional enchantment slots cannot be unlocked without Jewels of Yggdrasil.

In God of War Ragnarok, there are a total of 7 Jewels of Yggdrasil.

Jewel of Yggdrasil in Story quest

In the main quest “The Word of Destiny,” you can find the first jewel of the seven in Midgard after fighting the Frost Phantom Boss. The Jewel can be obtained immediately after defeating the boss or later from the chest of the blacksmith.

Jewel of Yggdrasil in Story quest

In the main quest “Forging Fate,” you can obtain this after eliminating the Ogre. Players can find the Second Jewel in Svartalfehim.

Jewel of Yggdrasil in Alfheim

In the main quest “Forging Destiny,” you can obtain this at the Forbidden Sands in Alfheim. In order, to obtain the jewel the player must ascend to The Elven Sanctum Building. Simply head front and then climb on your left after passing two doors. In a Legendary Chest there, you’ll discover the Jewel.

Jewel of Yggdrasil location in Svartalfheim

In Svartalfheim, on the island of Alberich, is where you can find the fourth Jewel. This can be found within a legendary chest at Alberich Island, which is close to the Bay of Bounty. To enter the space where the chest is located, you will require the Draupnir Spear.

Jewel of Yggdrasil location in Midgard

Fifth Yggdrasil Jewel can be found in The Oarsmen in Midgard. An underground Legendary chest has the jewel in it. Pull the enormous chains next to a large ship, and you’ll be able to go on it. Close to the chest, you will find enemies. Defeat them to open the chest with ease.

Jewels of Yggdrasil location in Vanaheim

The sixth Jewel of Yggdrasil can be found in Vanaheim’s Noatunn’s Garden. Once there, go to the building that is closed due to weight. Proceed to solve the riddle to remove the weight, and then open the door to reveal the Legendary Chest. The Jewel that will increase Kratos’ strength is hidden inside the chest.

Jewels of Yggdrasil location in Vanaheim

The Jungle, which is located in Vanaheim, is where you can find the seventh Jewel. Go on and you’ll see a short path within a dead-end gate. Moving forward, just leap into the large cage. Use your axe to unlock the wooden cage by solving the riddle. Seek out a legendary chest, inside of which the jewel can be found.

After fixing the damaged amulet, go to the armor menu. Select the amulet tab, and then equip the enchantments to your liking.

That covers all the information on how to obtain every Jewel of Yggdrasil in God of War Ragnarok. For more help, guides, tips and tricks, and more on the wildly popular game head on over to Retrology.