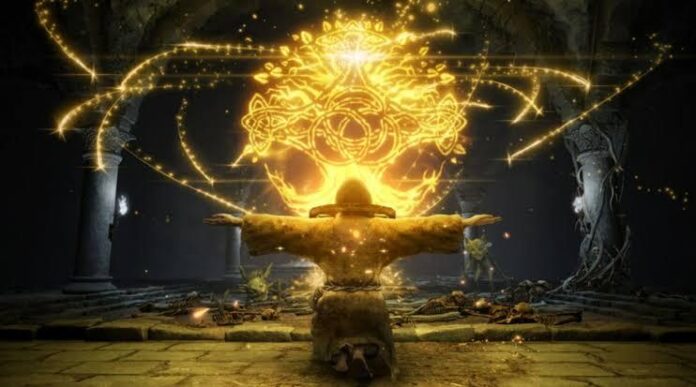 Elden Ring, an action role-playing game developed by FromSoftware and published by Bandai Namco Entertainment, prides itself on its effects and gear augmenting updates.

If the Madness meter fills up, percentage-based damage can be inflicted to their HP as well as to their FP. While this damage may not be as great as Bleed, the FP drain can be very useful for stopping many opposing builds in PvP.

A very interesting factoid about Madness is that once your Madness meter fills, players suffering from Madness can enter a lengthy animation. During this time, you are free to inflict whatever damage you want on them. The ground is yours!

You will be using this build to stack the madness effect on your opponent using Vyke’s War Spear and the Frenzied Flame Incantations. You can put this build to action by using the war spear to slowly amass madness and when you come across a chance, parry them and cast multiple incantations to speed up the madness build-up.

The armor is present in the build but it does not hold any more than thematic or cosmetic importance in the gameplay. It may, however, generate bouts of resistance against frost and bleeding which can prove helpful.

It includes the following two weapons:

Vyke’s War Spear is an A Tier weapon if you choose to go for faith and strength build. It is great for combat, especially PvP due to the insane tracking it has with the running attacks. You will find this melee weapon at Liurnia of the Lakes, near the path of the Church of Inhibition, after you defeat its wielder.

Parrying Dagger is a very heavily built weapon that can produce great opportunities for building up madness in your opponents. You can find this at the Patches at Murkwater Cave in Limgrave.

Frenzied Flame Seal is a Sacred Seal that scales primarily with Faith and is a good Weapon for incantations.

For Frenzy Spam build you can pretty much use any heavy armor that you prefer or have available.

The Flame of Frenzy

Lean towards FP but otherwise 50/50

These are the weapons that will be in use for this build:

Bull Goat Armor is used for this build. It is a staunch metallic protectant that aids you into increasing your defensive capabilities by increasing damage resistance. It also gives you high poise.

You can use a shield with Tank Madness Build. However, if you are to choose, Fingerprint Stone Shield would be a promising choice to make.

It is a Greatshield that is known as the safest possible shield to own in the game. It also scales with Strength which is a primary stat in the build and hence makes the build even stronger.

The talisman we go for with this build is

Greatshield talisman. This will allow us to reduce the damage taken by 20% and is a necessity for the Madness Build. Find out more about different talismans in Elden Ring here.

This was all about the Elden Ring Madness Builds guide. For more similar guides, keep following Retrology.