Elden ring best strength weapons for you to cheese enemies 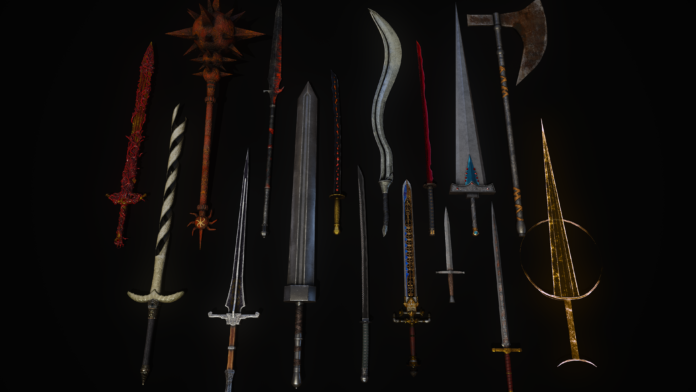 Elden Ring is a quite diverse game with giving you options in selecting the type of character you want. The customization is entirely in your hands. One of these customizations include weapon which are the most important part of one’s build. If you want to go for a tank build, here are some Elden ring best strength weapons which you can choose for yourself.

The premise behind a Strength build (a tank) in Elden Ring is simple, you get the heaviest armour and wield the biggest, most powerful weapons you can find. Not only that, but you also strengthen yourself enough that you may utilize such weapons as strength weapons are quite heavy.

Ghiza’s Wheel, which is similar to the Whirligig Saw, would appeal to Bloodborne fans. This weapon, which has been reintroduced due to popular demand, is essentially a chainsaw-like instrument that can be cranked up to slash adversaries into ribbons. It also does a lot of passive bleed damage, making it a great weapon against select bosses.

You can get it in Volcano Manor’s upper level after beating Inquisitor Ghiza. It stacks with Strength and Dexterity equally, so if you’ve levelled both stats, it may do huge damage.

With the highest Strength stat requirement in Elden Ring, the Giant-Crusher is as hefty as it seems. It has a great stagger potential against foes and is quite strong. But its sheer strength and damage is a clean sweep for any enemy available.

The reason why this weapon is not equipped enough is because it is hard to find and also requires a high level to wield it. Also the Giant-Crusher isn’t ranked higher because of its sluggish swing motion, which enemies or players can simply avoid.

This weapon, which was inspired by the manga Berserk, is one of Elden Ring’s greatest weapons. The Greatsword does what is look like it could do, inflict massive damage on a wide range due to its large stature. It wont let the Berserk admirers down as its a good choice even if its just an inspiration.

The Greatsword may be discovered in Caelid, slightly northwest of the Caelim Ruins Site of Grace, in a caravan. Beyond the basics, though, it is a consistently great weapon with the game’s fourth highest attack rating. Additionally, when combined with the right equipment, you will be able to rip through opponent like paper.

The Onyx Lord’s Greatsword scales with Intelligence and Strength largely, with minimal scaling in Dexterity. This weapon has a specific Magic Skill that allows the user to manipulate gravity and do damage while creating some space from close adversaries.

Onyx Lord drops it in the Sealed Tunnel, thus you can grab it there.

Mohgwyn’s Sacred Spear is one of the greatest Great Spears in Elden Ring because to its Physical and Fire Damage, and its active skill boasts its strength more. The combination of strength and fire is always a good one so this is a good pick for many. Although hit may seem super powerful, its not the best when you first get it so a few tweaking and upgrades are needed.

In order to receive this weapon, players must first fight the Blood Lord Mohg. He is not easy to kill as his weapon is powerful spear but you can kill him if you have leveled up enough in the strength department.

Even though fighting the Draconic Tree Sentinel is hard, gaining the Dragon Greatclaw is well worth it. It is because its a strong enormous weapon that every player who loves strength attacks can’t overlook.

However, this is more than just one of the strongest strength weapons in Elden Ring because its Active Skill, Endure, increases a player’s poise stat while decreasing incoming damage. Players may use this powerful weapon in conjunction with the Dragon Greatclaw Shield which is a strong combo ranking good in both offence and defence.

What goes well with power? There will be a lot of fire! Players who love blood and fire will adore Prelate’s Inferno Crozier, a visually attractive Colossal Weapon with flames covering it all. It can be obtained from its wielder at Fort Laiedd, which is located just west of Seethewater Terminus.

Prelate’s Inferno Crozier scales significantly with Strength and Dexterity and is an excellent Weapon for forceful melee assaults that launch foes into the air. It would be a powerful weapon even without the fire damage, but any status effect can be the deciding factor in the hardest battles.

Due to its weight, using the Grafted Blade Greatsword requires a great deal of power. To equip this weapon, you’ll need 40 strength and 14 dexterity. Even if its hard to get, its great damage scaling potential makes it worthwhile to have in your inventory.

Despite its appearance, the Nightrider Glaive is a Halberd weapon ideal for long-range strikes. This weapon has high physical attack and critical strike stats, allowing you to do massive damage. The weapon skill may perform a spinning attack as well as a follow-up assault, which can be useful for crowd management.
The weapon is heavy, and you need great strength to wield it. Your character’s dexterity can enhance damage slightly, but focus on the strength trait to dramatically increase damage. The sole disadvantage of this weapon is that players must beat a Night’s Cavalry which might be difficult.

The Clawmark Seal is a Faith weapon, making it an unusual pick for this Elden ring best strength weapons list. But it also scales with Strength, making it suitable for a Strength/Faith combination build. When combined with the Bestial Incantations’ low Faith stat requirements and tremendous damage, the Clawmark Seal is incredibly distinctive and effective.

Clawmark Seal is a wonderful choice for those who want to utilize magic while still being in good stregth. It may be obtained by feeding a Deathroot to the Gurranq at Caelid’s Bestial Sanctum.

With all those deadly weapons in elden ring best strength weapons, you may want a break from the death. So, check The Official Elden Ring Figures which are super cute and are best for an Elden Ring Fan. If you are still in the mood for death, you can see Top 10 Hardest Bosses In Elden Ring and keep slaying.