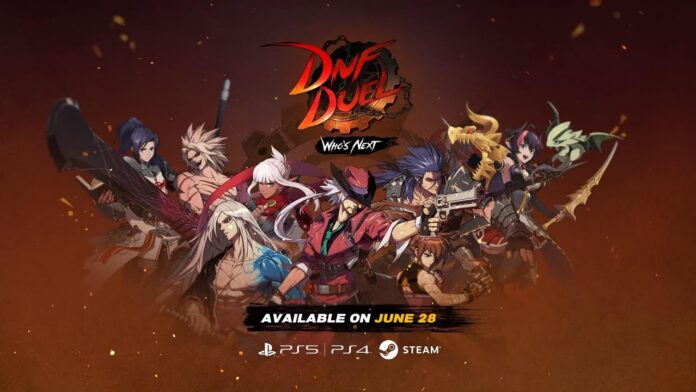 With DNF Duel just around the corner, everyone wants to play it as soon as possible. To ensure that you get a good experience, you need to know the basics of the game. Thus, here are the DNF Duel Beginner Tips and guide so you know about the mechanics and the ways you can go through this game.

DNF Duel is a fighting game created by Arc System Works, Eighting, and Neople. It is based on the beat-’em-up Dungeon Fighter Online. It includes several of the series’ classes as fully fleshed-out characters with distinct moves. Due to its predecessor’s popularity, it is normal for it to have this much hype so let’s get into the topic at hand.

Practice Before Diving in

The first and foremost thing, which many don’t seem to take seriously, is practice. Whenever you start a game, choose a practice to understand what the game is like.

Also, practice isn’t only for the beginning of the game. You can revisit whenever you want to practice your moves or warm yourself up before entering a fight.

Test out the characters to see which one is your best

There are 16 characters in DNF Duel. The best tip is to play with everyone to see which one is your character.

Going off by the looks is an old trick that almost never works, especially for beginners. To know which one to choose according to your preferred type, check our character’s guide for DNF Duel for more tips and guides on the character-specific moves.

Select the controls you are comfortable with

Next, go to the controller menu and change or keep the buttons. Keep in mind your movement and what you think is right for your movement.

For example, let’s say you are left-handed. So you will select the left-handed side of the button more to control the attacks and defense.

Test out the buttons multiple times in practice mode to get the hang of all types of controls, and combos, and do change if there is a problem with you controlling them.

Trust me it helps a lot!

Guarding is the key

Guarding is crucial in 1v1 combat games and the basic guard is the most effective. There are several counters for attacks than blocking but if you want to play safe, use the guard button.

It can hinder the progress of your character but it is best to wait for your opponent to exhaust themselves. It is safer to consider before moving yourself to attack. This gives a pretty big window for you to act under so take full advantage of this when the time comes.

Guard button makes sure that you don’t have to get any damage even if the special move is used. You may slip up but it will still save you from acquiring as much damage as the attack was intended to give you.

DNF duel is an interesting game in this sense as it also has limit for guard. You can surely guard yourself, but after a while, your guard will weaken, landing you in a crucial state. So the best way to combat this is to time the guard perfectly.

Both ways you are cursed but the better option is to be early if not on time to reduce the damage taken. However, keep in mind that the guard meter next to the timer will wear out with each consecutive hit. This will deplete the gauge until the defender becomes exhausted which leads to them having a guard break and is sufficiently open to attacks.

Guard Cancel is a way in which you can cancel other person’s guard strategy. Of course, if one player knows about the guard, the other would too.

To use this strategy, you need to first keep tabs on what cues the opponent gives while they attack or go into defense mode. Then you can see when they will defend.

After they let up their guard, start to use a simpler attack and then replace their guard. As they would think it is their turn to attack. Then by changing the attack mid-air and blow them with a much heavier combo.

This takes practice and isn’t always effective. Nevertheless, it is good for breaking their guard. This can also take a toll on their guard meter as they still used the guard while getting attacked.

Avoid getting knocked down

Avoid being thrown down as you won’t be able to defend for a while. This gives the opponent an open door to attack in combos. If the opponent does not continue with a ground attack, the character will automatically stand up.

By tracking statistics during the combo in training mode, you can measure how long it takes for your character to take action. With that, you can actually time your attacks as soon as it stand up or defend with another strategy. All this comes back to the point that you need to practice before playing.

Like any other game, the main focus is on the life and power meters of the character. These are also more widely known as HP and MP meters.

The red meter is the basic HP of the character which is your goal to finish. It is as simple as that and it is non-recoverable. It is basic knowledge that there are different types of attacks that take different levels of damage with

When HP drops below about one-third, the character goes into the awakening mode, gaining access to the character’s unique buffs. This is along with cinematic awakening skill attacks that do a lot of damage when hit.

Your MP meter, which is located just beneath your character’s HP, is utilized for MP attacks. When these assaults connect, they diminish whatever grey life your opponent has accumulated. And each MP attack has an MP cost so it affects. These may be found in each character’s command list, and the cost is decreased when the attack is launched.

When all of your MP is depleted, your character enters an ‘Exhausted’ condition. This unables them to perform MP attacks for a brief period. When you land an assault on the opponent, MP will begin to fill on its own. This implies that when your HP drops, you’ll be able to employ more MP strikes to lengthen combos or chip away at opponents more efficiently.

MP can be recovered by using

Conversion is a process by which you can change your grey life into your MP to give yourself a margin for more special attacks. It is a good call if you have a lot of life. But don’t use if you are on the verge of getting defeated.

One thing that you must focus on the most is the grey life. Grey life is the damage that is caused when you use a special move. It is, unlike red life, recoverable.

After you use a special attack, the opponent has a grey life. It fills up pretty fast so make sure to end it before it fills up again. You must know enough counters to end this grey life. This is to let the opponent stop at the lower life than before.

If you see this grey life on your bar, rush to defensive mode. You can then recover HP before you lose more life.

Lastly, try to be patient. There is no specific time so take your sweet time and wait for an opening to attack. Don’t use your special moves in the middle of the match randomly. Don’t attack when you know the opponent is also going to attack.

Be defensive whenever you think they are charging up for a big attack. Take the whole process slowly, piece by piece letting them exhaust themselves and then attack.

Here are the basic actions which may get you started up for the game.

Hope you find this helpful for DNF Duel tips and guides.

For more help on different topics, head on to our games section and have access to your favorite game.