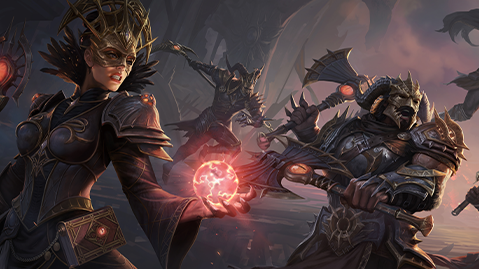 Diablo Immortal is a new free-to-play multiplayer action role-playing game developed by Blizzard Entertainment. This new addition to the Diable series takes place between the events of Diablo II and Diablo III. In this Diablo Immortal Beginner guide, we will discuss some tips which will help you progress through the game

The MMORPG has been mainly designed for mobile devices, but it is also available on Windows. Players need an active internet connection to enter and play the game. Additionally, the game can be played across platforms. Once a player connects their account to their Battlenet account, they will be able to access it on any device the game is compatible with. So let’s get started on this Diablo Immortal Beginner guide.

There are six playable classes in Diablo Immortal that players can choose from when they fight enemies in the open world or in the challenge stages:
Barbarian: Melee, Physical
Crusader: Melee, utilizes both Physical and Magical
Demon Hunter: Ranged, Physical
Wizard: Ranged, Magical
Monk: Melee, Physical
Necromancer: Summons, Magical

All classes have different skills and attacks. However, Barbarian, Crusader, and Wizard have been known to be more helpful to help you pass the earlier stages with ease. Monk and Necromancer are good options, but they may take a lot of time to master and can prove to be difficult to control early on.

Every class has different controls and skills. Some skills have to be aimed, charged, or have a cooldown. Besides the normal attack (the attack with the largest button) all skills have a cooldown and a player needs to wait before he is able to use the skill again.

It is recommended to play the game on 60 fps as it will be much easier to dodge attacks. Otherwise, it may take some time for players to learn the attack patterns and the exact moment when to dodge them. Players can also just stay behind the bosses to avoid taking damage.

Every class has four skills, besides the primary skill. These skills are unlocked as the player progresses through the game and levels up. The primary skills also have an alternative that can be switched out if a player wishes to change it. Furthermore, there is an ultimate skill that, once charged and activated, makes your normal attack more powerful.

Moreover, there are shrines that can be found in the open world that give buffs (Empowered Shrine) or immunity (Protection Shrine). Finally, enemies often drop some orbs which players can collect. There are six types of orbs which have different properties,
Quickening Globe (White): increase movement and attack speed for a limited time
Health Globe (Red): replenishes health
Experience Globe (Blue): give additional exp
Conduit Globe (Yellow): add electricity to your attacks for a limited amount of time
Energy Globe (Purple): refresh all skill cooldowns.

Elder Rifts are dungeons that after completing offer gems, runes, and fading embers. Enhancing the Elder Rifts with Rare or Legendary Crests may help you get more of the offering. The crests also add modifiers inside the dungeon itself. These Crests can be purchased from the Hilts Trader using Hilts or from the Shop.

Elder Rifts can be done in groups or solo, you can choose whichever is more efficient for you. Players should also remember that it’s best to keep moving inside the Rifts and encountering more elites than smaller enemies allows them to end the round faster.

Players can level up by doing Daily bounties, they are easy to complete and give a lot of exp. Encountering and completing Open World Events also awards players exp. Elder Rifts also give a lot of exp based on the number of enemies you kill in a row, the more you kill the larger the multiplier.

Gears may often have a lower score but may be better as they’ll be able to increase the damage more. You can check the stats in your inventory and you’ll have to carefully see if it really is better or not. You’ll need to maximize Strength for physical, and Intelligence for magical classes.

You should also upgrade your gear to see its full potential, if it doesn’t seem to work the best, you can transfer the gems and rank levels to another gear. Gems need to be placed in the slot that shares the same color, if they are not kept in their slot, it may not provide any bonus at all.

Legendary gems have unique effects which can change your builds. You can upgrade these gems as well to increase their abilities and bonuses. The character’s build menu will show you all the best builds for the characters and you can choose which one you can use if you have all the gems required for it.

There are many different currencies you’ll find, we’ll cover the most important ones here.

Hilts: Allow you to purchase Crests, Reforged Stones, Gems, Simple Charms, and much more from the Hilts Trader.

Gold: Used to upgrade Gear and purchase items from some vendors.

Gems and Runes: You can exchange items with certain vendors with these or upgrade some materials too. You can check this more detailed guide on Gems.

There is a daily login reward you get from killing enemies with certain characters every day. The Elder Rift gives one free crest every day if you open it. Free Daily Rewards can be claimed from the shop every day too.

That is all for our Diablo Immortal Beginner guide. You can also check out these Diablo Immortal Clan and Immortal Essence guides. For more gaming guides, stay tuned to Retrology.