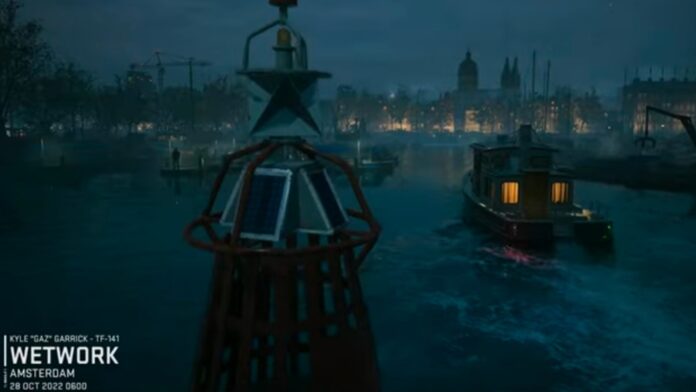 This is the third mission Wetworks will give you a task to sneak through the water onto the barge and get the guards out of your way. Your reward for his mission is Nessie.

As you begin the mission, you need to sneak to the barge without being noticed. And have to get rid of all the guards around it. This is an easy mission for you. There will be 15 enemies that you need to get rid of.

This is a bit tricky because most of the guards are working in groups and will be watching in pairs. You need to make a correct foolproof plan.

Here are all the guidelines and a silent plan to rid guards on all docks and patrolling boats. Once they are done, the mission will be smooth for you. Let’s get to it.

This is the easiest one to start with at the beginning of the mission to take the control of Gaz. As the mission starts, you need to swim through the water till there. You will see only one guard over there. It’s your choice how to take him down. Either you use your killing skills or you take him down with ledge takedowns. Once you get rid of him, you can get your hands on his pistol with a silencer. It will help you to wipe out all other guards with a single noise.

Move to the left of the previous dock where you will see three guards. Swim under the water to reach the dock from far away from the left side. My recommendation is to aim a headshot at the middle guard and shoot a knife directly at any nearby guard. As both guards are killed, the last guard will be an easy target for you.

On the right side of the dock, there will be a guard alone. You need to take care of him but before you step on his watch out for patrol boats. As the patrol boat is gone, the guard is a piece of cake for you.

Keep moving to the right side of the dock, there will be two guards watching the dock. Shoot down with your knife or a silenced gun to take down the other one.

There are two boats with two watch guards on each. You can take them down just the way you took down the guard on the left dock. Aim for a headshot and shoot a knife at the other one.

The last dock is with the barge with a large number of guards. My potential advice is to reach the barge from the right to the land. You will reach behind two guards. Same trick – knife and pistol.

Now it’s smooth. You will reach the dock where one guard will be on the watch. And you can get him down. The last guard will also not stand a chance.

In the end, you can get all the guards without being spotted. Modern Warfare 2 Nessie Trophy is all yours. And if you need more gaming content, check the Gaming section of Retrology.