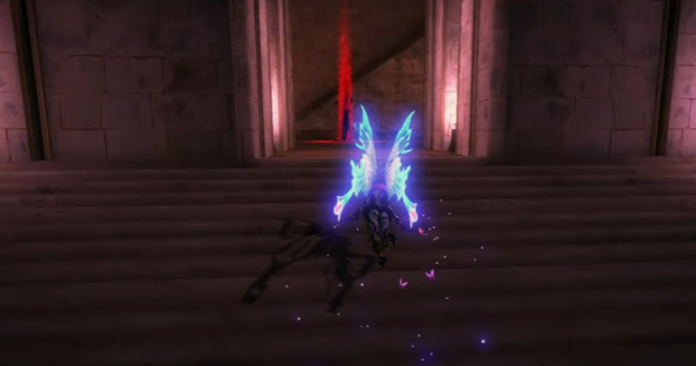 With Chapter 8 complete, you can move right onto collecting the next chapter collectibles. Similar to previous ones, Chapter 9 collectibles in Bayonetta 3 are as much hidden, so let’s get into the guide on how to collect them all.

As you start this chapter, look down as you jump, and you’ll see the first Figure Box tucked in the right corner below you.

Look straights ahead, and you’ll notice a bubble on top of a rock right in front of you. It’s a little far, so if you don’t see it, move forward a little.

Turn opposite to the location of card pack and go towards the rocks present by the water going downstream in steps. On the second rock, go near the bushes, and you’ll see a red light there. That’s the Frog Umbran Tear hiding there.

Proceed to the water pools where we located the Umbran Toad up and around the corner to a little waterfall where this next Echoes of Memory can be found.

Now, let’s go to the nearby tower and climb to the second level at the back for a chest containing a Broken Moon Pearl.

As soon as you enter the temple area, you’ll notice a dialogue by the protagonist. After this, go straight in the temple and interact with the red light present there. This is Infernal Presence.

This one is easy to spot on top of the temple to the right, where all the Malphas congregate, and completing its combat challenge will reward you a Broken Witch Heart.

After you’ve scared off a group of Malphas, you’ll locate this card pack on the far left side of this small region before entering the central temple.

Go outside the temple and look above the location of the Card pack. Go up the stairs and then climb up the rocks. Climb up, and you’ll notice the figure box on the left corner.

In the second room, there’s a record floating in midair between some windmills. Simply walk to the right side of the room and let the wind carry you up into it.

Go back to the right side of the area and interact with the box there. Hit it until it turns into a chest. Once opened, you’ll receive a Broken Moon Pearl.

Go towards the opposite side of this room until you reach an area with an opening to the right. Wind will take you up, so just go in. Once you interact, you’ll have to collect the puzzle pieces to get the Broken Witch Heart.

After that, move over to the right side of the chamber to uncover this Echoes of Memory concealed down a small crevice in the floor.

The crow is located inside the same temple hall where you need to shoot all the windmills in front of you.

Go up to the next room by stairs. Turn right and look behind the coffin like stone.

In the caves, you’ll need to break some pink crystals to clear the way. Go straight ahead and then jump up some stones until you reach a long landing. On the left corner, you’ll find this figure box.

Before you leave this room, make your way to the right for an easy Echoes of Memory.

During weight puzzle room in Verse 7, the Cat can be found on the right side of the door, opposite the room’s entrance.

After getting the cat, look at the lower level, and you’ll find it by a stone structure.

The Verse 8 combat challenge is located on the left side of the room, before the card pack. Complete the assignment to obtain the broken witch heart.

Behind the damaged door and rubble to the right of the room is a sneaky Card Pack. Look to the right side of the summoned Broken Witch Heart.

From there, go to the next room by going down the stairs on the opposite side of this. You’ll easily spot the bubble there.

Once you are safe, you’ll land in a room with a treasure box. Open it to get the bridge. Before going out with the stairs, look to the right and get the last card pack.

These are all the ones found in chapter 9 for Bayonetta 3 collectibles collection. If we missed any, do let us know.

Bayonetta 3 all collectibles in chapter 8