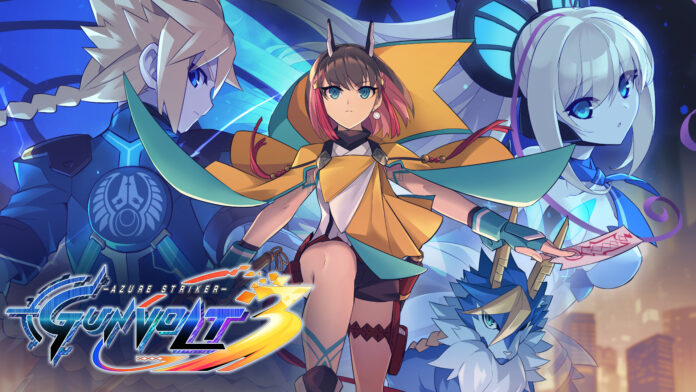 There are a total of 15 missions in Azure Strike Gunvolt 3.

Dragon Slayer is a quest in Azure Striker Gunvolt 3’s Sumeragi Futures Institute of Technology level. a facility raided by Kirin at the start of the game Here, she meets and seals Gunvolt. The first stage.

Holy Night XIII is a mission that takes place in the Downtown Christmas stage. It’s the second introduction one, following Dragon Slayer. The emergence of a Primal Dragon turns the most lovely time of the year into a horror of death. The second part is a Gunvolt lesson, since there are electric door panels and a section that needs him to fly, and the Fetters Gauge never depletes.

A huge arcade that resembles a theme park. Sharon’s rampage has transformed the once-thriving game centre into a stronghold teeming with killer machines.

The stage is named after and partially inspired by the Cyber Kowloon Walled City, also known as Warehouse Kawasaki, a Japanese dystopian cyberpunk-themed arcade that went down in 2019.

Pride & Battle is a quest that takes place in the Old Capital Temple stage. A city temple that has been modified with numerous technical protections. This mission is all about pride which leads the boss battle occurs as “true” combat.

This mission takes place in the Stormy Megafloat stage, which involves a port area with a yellow sky, rainfall, and lightning. Shifting platforms must be jumped across deep water, some of which are explosive. The second section of the stage takes place within the shipping facility. The medium boss has an amphibious patrol aircraft.

Another Sun is a mission in stage Ballistic Missiles. The assignment is unlocked once all four Berserk Adept missions have been completed. A succession of rockets flew at the country and somehow managed to avoid the barrier. The mission is primarily concerned with the missiles that are the result of the betrayal.

Phantom or Mystic Mist is a quest in Azure Striker Gunvolt 3 that takes place in the Forest stage. Serpentine “The Mystic Mist” Septima is Phantom Mist, which is where the name came from. It gives her the ability to conjure illusions out of the fog, among other things.

Trick Bullet or Trick Shot is a mission in Azure Striker Gunvolt 3, taking place in the sage Abandoned Factory. This place is an abandoned oil refinery. Part of the floor is on fire as a result of explosions, yellow gas pervades parts, and collapsed pipes fall when stepped on. Needless to say, be careful during this mission. The main objective, like the previous one, is to defeat the boss Sistina. The title of the mission is also based on her famous attack.

Sandstorm is a mission taking place in Desert Base. Following previous names, this is also named after the knight boss.

The stage for this mission is in Megafloat “Neptune”.

Sunrise Palace is the first of the final missions, taking place in the stage Sunrise Palace 1. The last boss appears in this mission again.

Karma is the second of the final missions, taking place in the stage Sunrise Palace 1. There are multiple bosses, old and new, in this stage.

The third of the final ones, taking place in the stage Sunrise Palace 3 is Heliacal Rising. Two previously known bosses are part of this stage as well.

Boss: Grazie “The Sand Fortress” and Sistina “The Fatal Gunwoman”.

The concluding mission is Zed, which takes place at the level Sunrise Thrown. In essence, it’s a VS Mission with Zed at maximum capacity. Considering how he is on the cover and posters, this was expected.

Moebius is the final assignment in Azure Striker Gunvolt 3, which takes place on the World Moebius level. After beating Zed and putting a stop to his aspirations, the heroes may not be done yet. Their conflict also unintentionally reawakened Moebius, who now tries to actualize the world he envisions, one of devastation and death. Moebius is now the last boss.

That’s all on Azure Striker Gunvolt 3 Missions. For more updates on games, follow our gaming section on Retrology.