As Dusk Falls Review: An Interactive Story Enriched with Family Drama and Crime 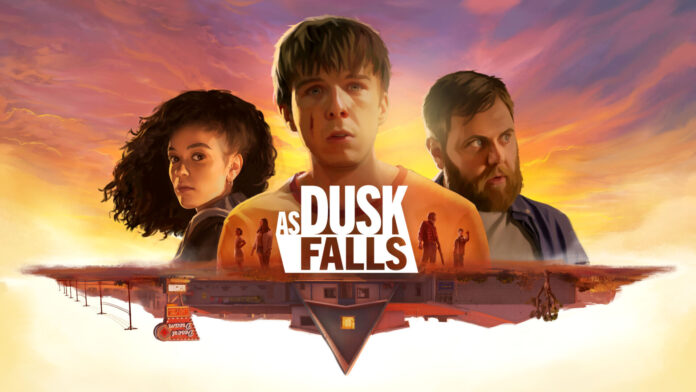 As Dusk Falls is an interactive drama by INTERIOR/NIGHT. The game time spans thirty years and follows the lives of two families and the choices they make. In As Dusk Falls Review, we will discuss the basic plot – without any spoilers, discuss game features and give a complete overview.

It is a tale of how our previous mistakes come back to slap us in the face in the present. There is no running away from them but you can face them and try to make things better as time goes on. Most decisions in a well-designed game feel meaningful, and good writing nudge empathy from the most unlikely of sources and this game does just that.

Contents
1) Basic Plot (without the choices)
2) The Influence of Interactive Stories
3) What is this new type of animation?
4) Play it on Xbox!

Basic Plot (without the choices)

In 1988, the began as a small-scale domestic drama. Resting at a wayside hotel for the night, the modest family becomes mixed in an escalating stand-off when they are kidnapped. The kidnappers are three brothers who have just robbed a sheriff. This spirals the family into a deep connection, a bad one to say the least, to the history of both families. At present, their intervened past and their past flawed decisions are still impacting generations.

As Dusk Falls is a branching thriller, you can play as both the antagonists and the victims. The game also explores the present times and there we get to see what effects those past problems have on the children of today. What’s interesting is that you move across the whole story spiraling back to the first incident. This helps you piece together the story and what lies or truth were spewed by their parents.

Here is the trailer by Xbox to help you understand the game more.

The Influence of Interactive Stories

The wonderful thing about interactive storytelling is that they go beyond typical, linear stories. They teach us the consequences of our choices. We feel their emotions and challenges from their point of view when we play as a character. However, the decisions we make for children remain highly personal. By putting ourselves in the shoes of others, we gain a greater understanding of them while also learning about our true nature.

The ending would also encourage you to try and play it again to get a different result to see the story that was previously left off. This brings an urge to learn about everything, every character, and explore the story to its fullest.

What is this new type of animation?

As Dusk Falls’ painted graphic book style is the result of a blurring of the borders between 2D artwork and 3D video capture. This is accomplished by recording the performers on a green screen and then combining that live-action video into a 3D set. The animators were able to choose photos from the live-action footage that truly portray the emotional emotions needed to tell the tale, and then they painted each image by hand and combined the two.

According to Caroline Marchal, CEO and creative director of Interior/Night, this is more adaptable than traditional animation processes.

“I didn’t want to do mo-cap this time. I’ve done a lot of games with performance capture in the past and, when you want to tell a specific story, you need a lot of specific animations – it balloons production.”

Also, the use of individual frames instead of a video recording is a refreshing take on the recent games we’ve seen. The frames change with the slight effect of the previous frame still on display giving it the look of a slow-moving cycle.

Play it on Xbox!

Members of Xbox Game Pass Ultimate may skip the installation and play from the cloud on Windows PCs, Xbox consoles, phones, and tablets. For those who like to game on the go, Dusk Falls may be played controller-free from the cloud. This can be done by using native touch controllers on your compatible mobile device.

That’s everything about As Dusk Falls review. Hope you like it enough to give it a try.

Check out other reviews on the latest games here:

As Dusk Falls Save File Location