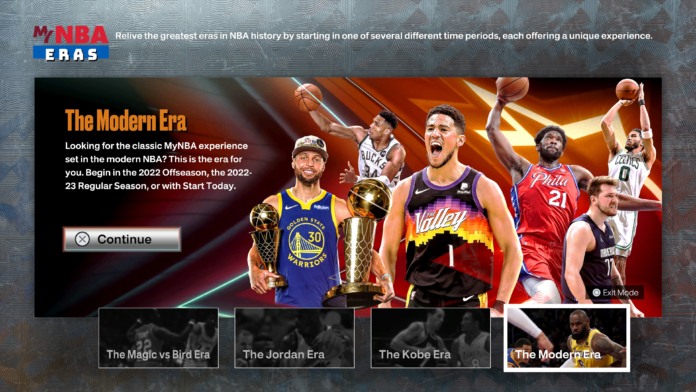 The Magic vs Bird Era

This era takes you back to 1983 and beyond, as it helped bring the NBA again on the map, hence the name. This era started when the famous tale of rivalry between Magic Johnson and Larry Bird began to emerge. As the rivalry and tension simmered, the NBA also became more known all over the world.

The league incorporates more physical plays and hand-checking. An in-game presentation reminiscent of the 1980s with simple overlays is featured. Many can rewrite 1980s NBA history by competing to pick Michael Jordan, Akeem Olajuwon, or any of the other NBA legends drafted during that iconic decade.

Zone defense is prohibited during this time. When you enable this era, you will get a more vintage overlay. Along with it, you’ll get unique 80’s commentary, which will help make the scenario more realistic. There is also the addition of various new costumes and floors while playing with this era.

The Jordan Era, which began in 1991, places players at the start of Jordan’s successful tenure with the Chicago Bulls. Michael Jordan was the NBA’s GOAT in the 1990s. There isn’t a basketball player alive who hasn’t heard of him. You know you’re good when a whole era is named after you. During this period, Michael Jordan and Shaquille O’Neill rose to prominence in the sport.

During this time, the Back to Basket was made illegal in 1999, hand-checking was legalized in 1996, and zone defense was legalized in 2001. Several new floors and uniforms may be seen while playing games, and more intricate overlays are mixed with the typical 90s-era presentation.

With this era enabled, you’ll be able to play with a more advanced overlay representation of the historical period related, as well as additional uniforms and floors.

The Kobe period occurs in the 2000s, at which time various basketball legends launched their legendary careers. There are still many disapprovals of how this era was named after one person when LeBron was as much of a remarkable player as Kobe was.

Some important new rules were introduced during this time. In 2007, social media became influential, and the league expanded to six divisions. The Charlotte Bobcats entered the NBA in 2004 as well.

Several new floors and uniforms are available in this league, as well as a 2000s-era presentation with enhanced overlays and particular commentary, as well as a rebuilt commentary booth. In addition, seven first-round playoff games were added in 2003, the Sonics rebranded in 2008, and the instant replay option debuted in 2002.

The NBA as we know it today is the modern age. This currently represents the modern period. Starting in the 2022 offseason, you will go through the current season to find who is now the league’s champion. The All-Star Teams were redrafted in this period in 2018, and play-ins were added in 2020. The Nets rebranded much sooner, in 2012.

You’ll get the modern overlay with distinctive commentary and new uniforms if you enable the Modern era. Coaches will be able to contest calls beginning in 2019, a new simplified timeout system will be used in 2017, and the All-Star game will have a fixed-score finish. The presentation includes modern commentary from the current commentary booth, a presentation from the modern age, and contemporary overlays. Several new defects and uniforms have also been introduced.

That’s it for all the NBA 2K23 MyNBA Eras. Hopefully, this gives you an idea of what they are like. For more guides on NBA, click here.

How to Unlock NBA 2K23 all Spawn Points in The City...