All Soldiers located in Spider Lair in Souldiers 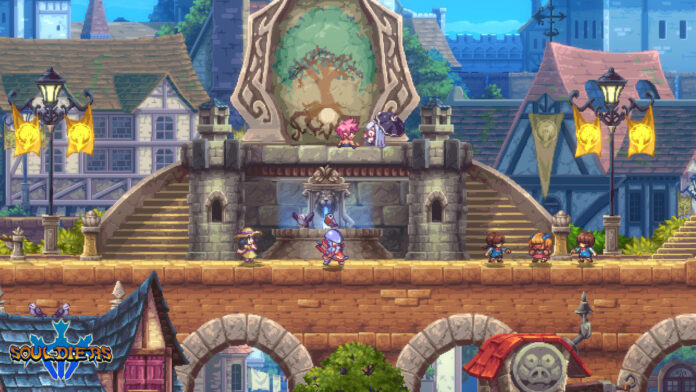 Souldiers is a Metroidvania, action and adventure game developed by Retro Forge and published by Dear Villagers. After a long delay, the game was finally released on the 2nd of June on Windows, Xbox, PlayStation, and Nintendo Switch. Here we will guide you to all the soldiers in Spider Lair in Souldiers.

From the location on the map, go to your left to the very end of the tunnel and slide down. The soldier will be found tangled inside some webs from the ceiling. Burn the webs to free him.

For the second soldier, climb up the ladder and jump to the edge of the rocks on the other side. Blow the wall up and climb back up to the tunnel revealed. The soldier will be tangled in the webs on the ground.

For the next soldier, jump down from the location and go towards your right till you see a ladder. Instead of sliding down, jump to the tunnel on the other side to find the soldier stuck in the webs to the ground.

On the location marked on the map near the shop, jump down and then jump across the spikes to the left. The soldiers will be wrapped in the webs from the ceiling.

From the location marked, go to your right and jump down. The soldier will be stuck in the web on the ground next to a torch.

Finally, for the last soldier, you’ll need the ability to double jump to jump to the other levels of the lair. From the location marked, go left and jump across the stairs and then jump up to the block of ground above. Go further to your left, jumping across all the platforms till you reach a tunnel with a dead end. The soldier will be inside the web on the ground.

Once you have found all the soldiers you may get the rewards from Hafin City by talking to Makerel inside the Zarga Marquee.

That’s all for our guide to all the soldiers located in Spider Lair in Souldiers. Moreover, you can also check out this complete Diablo Immortal guide for Beginners. For more gaming guides, stay tuned to Retrology.

How to Heal Injuries In King Arthur: Knight’s Tale

King Arthur: Knight’s Tale is now officially available for you to...

Guardians of the Galaxy – Save File Location