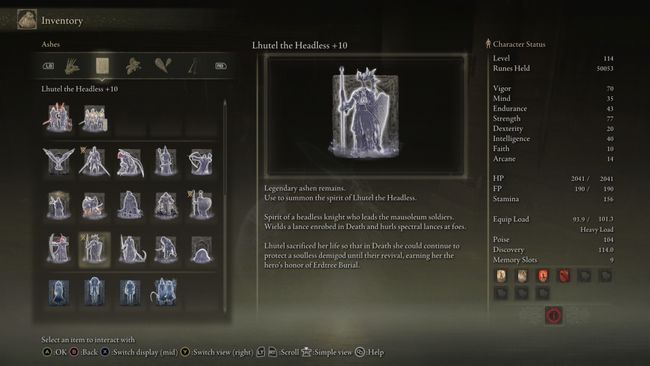 With the new spirit summoning feature in Elden Ring, players get the feeling of multiplayer help while playing in solo mode. If you choose summons to be a part of your character class and attribute stat spread you’ll want to get your hands on the “Legendary Ashen Remains”.

Similar to the Lone Wolf Ashes Summons you will just have to ring a bell in the places they are available and they will summon extra help to fight the enemies with you. Being legendary characters means that they are deep-rooted in the Elden Ring lore and will be more powerful than regular summons.

There are six Legendary Ashen Remains in total. All of them are spread across the map in different areas. Once you get an Ashen Remain you can upgrade it at the Roundtable Hold to make it more powerful.

In this guide, we will help you to get to all the locations of Legendary Ashen Remains.

Lhutel is one of the best summon ashes characters. She has a shield, a spear and can attack enemies from a distance dealing a huge amount of damage.

In order to get her to make your way south of Limgrave to the Weeping Peninsula towards the Tombsward Catacombs. Over there defeating the boss, among one of the loot drops you will get Lhutel’s legendary ashen remains.

The Mimic Tear does not cost FP to summon rather it costs HP. It summons an exact replica of your Tarnished that fights enemies for you.

For this item, you do not need to defeat a boss rather you need a Swordstone Key from inside the Night’s Sacred Ground area, near Nokron City. At the Ancestral Woods Site, you need to get to the cathedral-like building. Just before the ground floor starts you’ll see a Swordstone Key door. Unlocking the door you will find a chest with the ashen remains.

Kristoff is a powerful knight that attacks the enemies with a spear and a shield with quick attacks.

The ashes can be found in Leyndell, at the Altus Plateau. Make your way inside the Sainted Hero’s Grave dungeon.

Black Knife Tiche has the same sort of moving and attacking skillset as an assassin.

These Spirit Ashes require you to follow a side quest. As part of Ranni’s side quest, you will reach Moonlight Plateau. There you have to defeat Tiche and take her ashes as a reward.

These ashes can be found in the Prayer Room Site of Grace within Elphael. Defeating a Cleanrot Knight, and opening a chest will get you the ashes.

That is all for the guide to all Legendary Ashen Remains locations in Elden Ring.