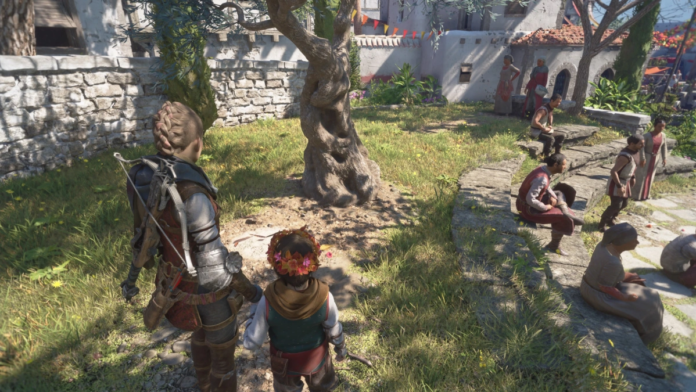 At the start of Chapter 6, you’ll begin from a big field, and the girl will race her younger brother. All you have to do is chase Hugo till he collapses behind a tall tree and remains knelt to study a pile of stuff on the ground. Interacting with Hugo will get you the Jay feather. The Jay feather is the one that starts this series of collectibles and is important for the storyline.

Continue until you reach the beach at the beginning of Chapter 7. Continue until you get to an elevated wooden shack on your left. Enter this shack through the window, then follow the path through it. The Black Headed Gull feather can be found along the cliff.

During the Celebration of the Brighter Days section of Chapter 8, the third feather can be found at the market. Head left from the island’s central marketplace towards the grassy opening. You’ll notice a gathering of people seated and listening to a woman speak. Follow the stone wall until you reach a tree. There you’ll find Black Kite feathers at the base of the tree.

In the Sanctuary part of Chapter 10, progress through the first zone and a door to reach another section that begins to wind up the hill. Avoid the metal door on top by going up the hill to the left of it and into the nearby grass patch. They can then leap through the window and turn to the right to take the steps to the roof.

Once on the roof, you can open the door and enter the tower. As soon as you enter the tower, climb to the top, then climb up the wall and follow the path. The Barn Owl feathers can be found along the wall on the left before falling from the cliff.

This is found just after utilizing the chandelier to escape the temple in Chapter 10 of Bloodline, The Old Temple. Take the left-hand road that goes to a cliff edge with a view of the sea as you move on. The Raven feather can be found by continuing to the cliff’s edge.

You’ll need to light a barrel halfway through Chapter 11’s section on Byzantine technology to unlock a subterranean door. A barrel is concealed behind the wall between some wooden beams after you turn 180 degrees and pass through another blast. Amicia and others can enter a small, secret tunnel by blasting open this barrel, where you will find the Goldfinch feathers.

The location of the last item from Hugo’s Collection in A Plague Tale: Requiem occurs pretty late in Chapter 13. Amicia, Hugo, and Lucas will have to cross a collapsed tower in the section where they would pass through a destroyed village. After crossing, proceed through a few rooms before descending into a little space with a cart that can be moved in the direction of a nearby wall.

Steer the cart away from the exit and back in the direction they originally came from. They can then climb up a wall after jumping onto the cart there. The Greylag Goose feathers may be seen next to a pillar on the left once they are at the top.

That’s all of the seven feathers included in Hugo’s Collection in A Plague Tale: Requiem. For more guides, check out  guides section on our site Retrology.